White island is New Zealand’s only marine volcano and the most active volcano of all 18 in New Zealand, most recently erupting in October 2014. White Island was named by the Maoris ‘Te Puia o Whakaari’, meaning the ‘dramatic volcano’. I don’t think it gets much more dramatic than gas masks, hard hats, a bubbling volcano, which is very, very active in the middle of the Pacific ocean and for the drama factor let’s not forget the disclaimer – you’ve signed your life away in the event of an eruption!

Incidentally, while Captain Cook was navigating around New Zealand he named the volcano ‘White Island’, seeing it from a far and not recognising it was a volcano, I wonder if he’d come closer what name he’d have chosen? Back in the day White island was a sulphur mine, according to our guide a ‘carnivorous’ place which claimed the lives of nearly everyone who worked there. The acidic vapours wasted their clothes and eroded the enamel on their teeth turning them black – ew! After two major incidents operations ceased and now White Island is a tourist attraction and a monitoring station.

We chose to visit White island by boat with a company called White Island Tour’s on there boat called Pea Jay. Actually our wallet probably chose for us, flights to white island are $685 per person while the boat was $229 per person with lunch – bonus. The flight would have been quicker, allowed for some awesome ariel photos and been a more personal tour, but for the money I could have flown to Thailand for a week’s holiday all-inclusive! (Okay not quite but you get what I mean!)

Note: It’s not possible to land on White island, for those of you with your own boats looking to save some dollars. Its private land, so you need a permit, also when we landed it was quite rough – the skipper explained that this ‘ain’t nothin’, the jetty was smashed to pieces recently by the ocean. Don’t be an idiot – pay the man and stick to the tour. Once off the boat and “safely” ashore we began our tour, we headed up to a sulphur vent which was spewing out sulphur gas, suddenly the wind changed.. and then the gas mask was defiantly needed. The gas made it difficult to breathe without the mask, they were not just for effect after all! The sulphur vapour in the air and generally the whole environment is extremely corrosive. Children were crying and old people were heading back to the boat – not quite the drama we had in mind. 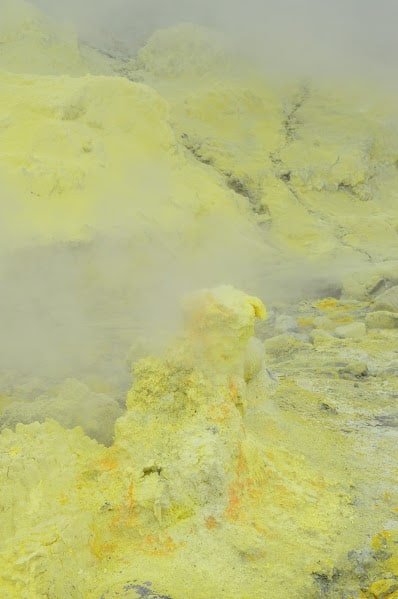 Sulphur made us cough a lot!

Next we made our way to the crater Lake, it was a beautiful turquoise colour the day we visited and changes colours on a regular basis. Apparently the crater would be a good operation for those in the business of disposing of bodies, it’s acidity levels are off the scale and the remoteness make it ideal for these sort of activities – or so our guide told us.

There were plenty of bubbling mud pools and sulphur pits, the ground in places is quite warm. Generally the whole place is quite alien, looking back over some of the photos, I’d probably have said this could have been the surface of another planet, or the moon?

Next we investigated the remains of a sulphur processing plant used to extract raw sulphur back in the day, the building has had it’s back doors smashed in and the roof has caved, various iron, wood and copper instruments remain at the mercy of the elements. About ten years ago(?) a reporter came to White Island looking for something to write about, but in the end left with a story about a toy dinosaur on one of the cameras monitoring the volcanic activity. Now, ‘Dino’ is like a celebrity, I’d not have believed it, but the couple sat next to us had come all the way from China to see the toy dinosaur. They were even trying to watch the feeds on their smartphone on the journey over…I know!

To sum it up, this trip is a must, the scenery is like no other in New Zealand and how cool is it to say to your friends you have walked up the a crater of a active volcano! Ten cool points to you!

Want to incoporate this trip into a bigger trip to NZ? Check out our 30 day self drive itinerary around both islands.

For other really cool ways to visit White Island do check out the link below, we would have loved to have flown their but unfortunately our 2015 year old selves just wouldn’t allow it!